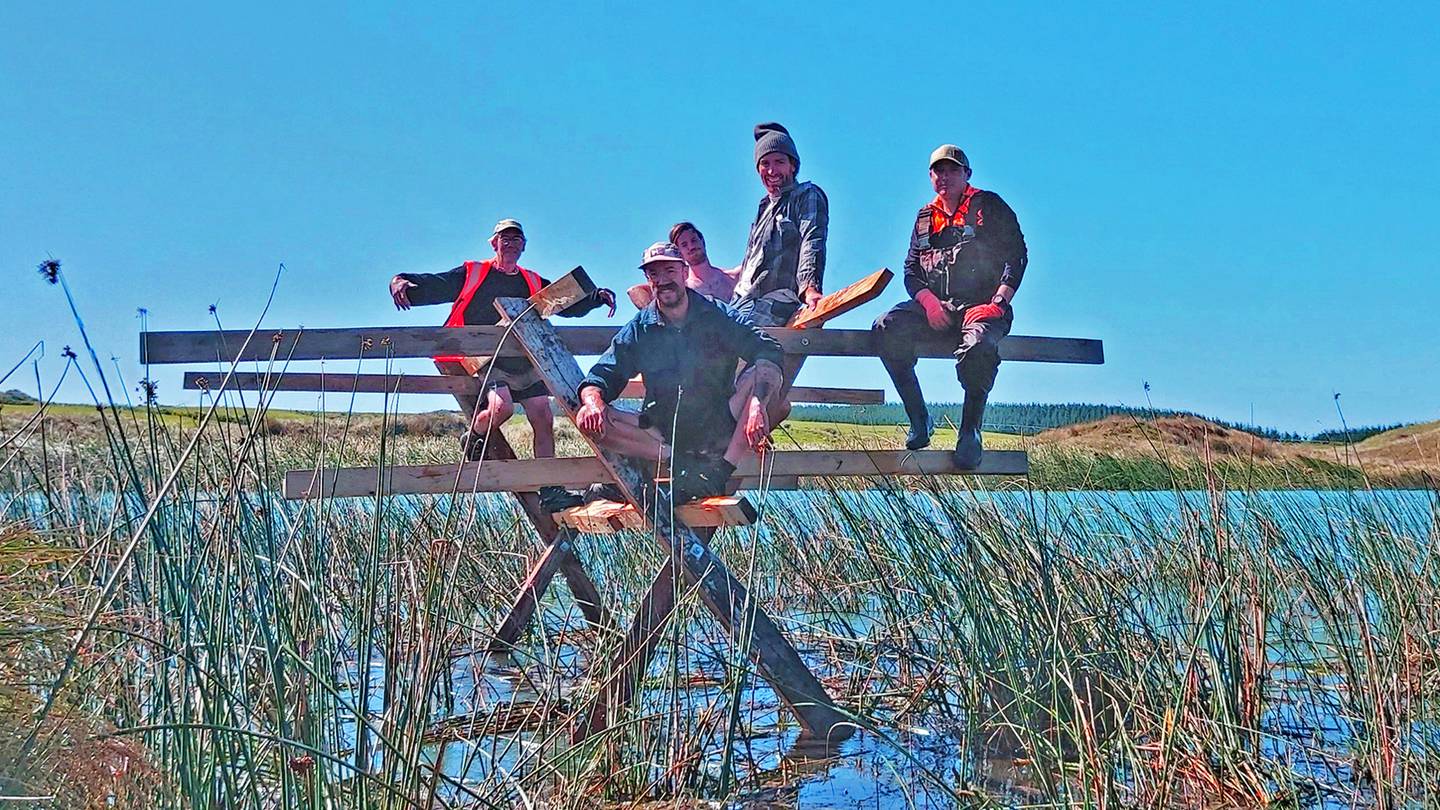 The following article appeared in the Whanganui Chronicle on the 13th of April, 2021. Link to the full article here.

In mid-March, two large timber structures were erected at Tapuarau Lagoon in the Waitotara Conservation Area, just inland from the mouth of the Waitotara River.

Constructed from heavy, 3m long, old wharf piles, and connected by joists of eucalyptus, they were built by MacBlack Timber in Whanganui, then taken to Tapuarau in kitset form and reassembled.

Given the weight of the timber and having to work in waist-deep water over a muddy bottom, erecting these structures was a challenge for those involved: Richard Thompson and three of his team from MacBlack Timber; Josh Penn from Ridgeline Forest and Farm Ltd; and Tony Woodill of Hawken Contracting, who transported the materials to the site.

What are these structures and why were they being erected?

They are bird roosts, set up primarily for the shags that forage at Tapuarau. Shags feed underwater on fish and large aquatic invertebrates. Despite having water-repellent flight feathers, the birds' body feathers become wet and need drying out after each foraging session. This is why one often sees these birds sitting out of the water with wings spread.

Ideal foraging habitat for shags is therefore one where there is both adequate food and somewhere to rest and dry out afterwards. But why shag roosts and why at Tapuarau? To answer these questions, let us step back a bit.

A project of this magnitude is not without environmental impacts. One of these was the loss of three farm ponds at the site, which were filled in to lessen the area's attractiveness to waterbirds, thereby reducing the risk of bird strikes.

To mitigate the loss of these ponds and its impacts on the birds that use them, Tilt Renewables consented to various mitigation measures, including enhancing habitat quality at a nearby wetland.

In consultation with the Department of Conservation and Ngaa Rauru Kiitahi, Tilt Renewables agreed to improve waterbird habitat at Tapuarau, 10 km ESE of Waipipi, and monitor the outcomes.

Tilt Renewables' Ecological Monitoring and Management Plan proposes several conservation actions at Tapuarau. One of these was to erect two shag roosts, as the area lacked safe resting places for these birds. This has now been done.

Another is to control non-native predators in the area, such as feral cats, stoats and rats, which will help protect the birds at Tapuarau and further enhance the area's attractiveness to them. That part is currently being prepared.

The outcomes of these measures are being monitored to assess their effectiveness. To date, they look positive. Two instances of shags already using the roosts have been noted; more will surely follow.

Peter Frost is an ecologist contracted to monitor the impacts of the roosts and other measures on waterbirds at Tapuarau.